A barbecue cookoff has high expectations – for the cooks, judges, organizers, and public. Each year that an event is held, everyone expects it to be better than the last one. Because an inaugural event can’t build on past experiences, a first-time event is sometimes entered with apprehension – about what will go right and what will go wrong.

The Town of Mount Pleasant, NC, joined the barbecue circuit when it held its first Polar Pig Cookoff, appropriately named for an event near the end of the year. For the inaugural event, 25 teams completed in the pro competition and another eight in the backyard category. The town plans to make the event annual because, as the Mayor Del Eudy says, “there’s a lot of cookers here.”

An event that is the first one of a hoped-for continuation often produces surprisingly good results as happened in Mount Pleasant because organizers are so determined to be successful. The barbecue entries that I judged were just as competitive as those turned in at established cookoffs. Although many judges were from the region, others had traveled a long distance, such as from Ohio, to participate in this inaugural event.


An important part of a fall event is weather, which was perfect for the inaugural Polar Pig Cookoff. Although “polar” is part of the cookoff’s name, the area was far removed from any polar conditions. The balmy fall weather benefited the cooking teams and also enticed local residents to check out the festival and enjoy live music, craft vendors, and children activities.

Even though the cookoff was Mount Pleasant’s first, it attracted more than the usual number of cooking teams for an inaugural event, which guaranteed its success for this year and also projects even better success in the future. For a small town of only 1,700 residents, Mount Pleasant can be proud of its inaugural cookoff.
Posted by Ray Linville at 2:00 PM No comments: 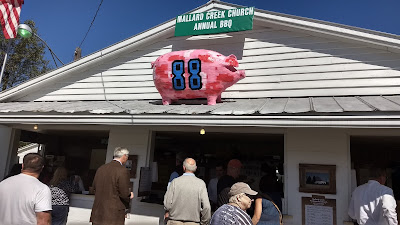